Wear tattoos – they will accompany you to the next world

Tattoos have become a fashion statement these days. The multicolour tattoos with modern motifs are a rage among the young generation. Tattoo studios are mushrooming up in urban areas and the tattooing technique is becoming safer, quicker and easier with the advance of technology. Once practised by tribals and indigenous people, and hated by the nobles – tattoos have earned a reputation of beautifying the wearer.


There are records of Polynesians, Samoans, Filipinos, Chinese, Indonesian, Japanese and Northern European tribes wearing tattoos. Researchers have even dug out mummies with tattoos and explored ancient clay figures with tattoos which date back the tradition to prehistoric times.

Tattooing – a popular Tharu culture
Tharus, the indigenous people living in the southern plains of Nepal, have been wearing tattoos since time immemorial. Tattooing was quite popular among Tharu women. They used to get tattoos on their arms, legs and chests to make them more beautiful. The tattoo is called Godna in Tharu language and the tattooers, usually old women, are called Tikaniya.

When I asked an old Tharu lady why she got tattooed all over her body, she had a short and simple reply – when she will die, nobody will accompany her to the next world – but the tattoo will. She also explained that it is a form of permanent jewelry, which can neither be stolen nor erased and that she felt more beautiful with the tattoos on her body.

Once tattooing was compulsory for married Tharu women and they used to get tattooed on their legs prior to marrying, generally in the month of March (the months Falgun – Chaitra in the Bikram Sambat calendar).

Motifs inspired by nature
The tattoos in Tharu culture are inspired by nature. The most common motifs to be tattooed are lines, dots, crosses and several other natural elements. The most common and complicated tattoo that I have observed is that of a peacock, called Mejoor in the Tharu language. While many other motifs are drawn by the experienced tattooers, all of them follow some natural pattern – some modified, some designed to resemble the objects in the vicinity.

Tattooing is painful and gruesome, if done the traditional way. The Tikaniya uses tattooing needles and natural black ink obtained from the soot gathered from a mustard lamp – the process is slow and sometimes the tattoee even faints. The part to be tattooed is rubbed with cow dung and later washed well with water. After drying, mustard oil is applied to make the surface soft. Then begins the painful process of marking the designs and pricking with the tattooing needles.

Declining interest among youngsters
The rigorous and painful process of tattooing was always one of the restraining factors. However, to remain being an active part of the society, the Tharu women in the past used to get tattooed. Having no other means of beautification, tattoos were really popular among the Tharu women.

However, once considered an act of beautification has turned into a vanishing tradition with the modernisation. Now the young generation has many alternatives to enhance their beauty. They don’t need the permanent black motifs all over their bodies to look beautiful anymore.

The influx of people from the hills and North India has influenced the Tharu culture, tradition and rituals. Nowadays the practice of having tattoos of traditional motifs has nearly disappeared. The old experienced Tikaniyas are no more found in the villages nor are there any takers who can steer forward this age long tradition.

Need to modernise the tattooing
The tradition of tattooing is on the verge of vanishing. However, looking at the popularity of modern tattoos among the young generation, there is an imminent need to record the age old motifs used by the Tikaniyas. The motifs need to be modified to suit to the taste of the young generation. The black ink from lamp soot needs to be replaced by multicolour inks. The tattooing needles need to be replaced by the modern tattooing machines. The painful and gruesome practice of tattooing needs to be changed to a pleasurable experience by using the modern methods. However, the Tharus need to stick to the basic designs of the motifs. This will lead to saving the age old tradition being kept alive by few handful Tharu ladies. 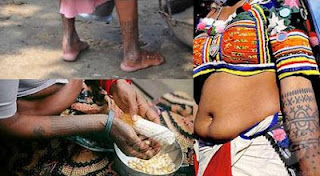 (Thanks to the photographers posting the above images in the internet)

Email ThisBlogThis!Share to TwitterShare to FacebookShare to Pinterest
Labels: Traditions